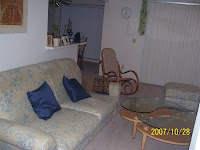 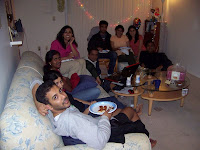 Everybody has there childhood lane where they remember playing hide and seek, going to grocery holding their mom's hands, there is the atta chakki and there is the vegetable vendor who would be expensive as compared to the veggie market but then good enough for emergencies.

The street I am gonna talk about is the memory of my youth. I don't want to sound cynical but I know I will never be able to have friends of the kind I had in Seattle. Friends who cared for me like my family. Friends whom i care for even today like my family. Part of my formative years- part of my life when i was financially independent and single. The friends who gave me my bachelorette party and to whom I gave theirs.
3 years i lived in Adagio apartments in Seattle. After looking 4-5 apartments, I had instantly loved this one - for having a walk-in closet and most importantly a french window in the dining room and wall made up of glass to let the sunlight in during the morning in the living room. I loved my apartment. It was 5 mins drive and 25 mins walk from my work place. That the weather didnt permit me to walk was another story. Little did I know that the best feature of the apartment I was gonna discover later. It was on 148th street. a street studded with apartment homes - The lakes (which had a nalla and extremely noisy swans and they called it lakes) and Hampton Green (a total disappointment if you have seen the New York's Hampton's neighbourhood) and one more (I can't believe I forgot the name). It so happened that all the folks I eventually befriended (the gang) ended up living in one of these apartments - 2 mins drive or 15 mins walk. And hence started the beautiful country lifestyle of ours - the proclub (our gym which btw is also the biggest gym of US) was in that lane too. End of the road had both Safeway and Fred meyers for grocery. 15 mins away was Mayuri - Indian video and snack shop whom we would hate for poor quality but would go nonetheless. And that's how all of us started living - like a small desi community (relishing sambhars and pakodas) within a community of Americans. Life was simple - going for long walks - arbitrarily dropping at someone's place for tea (without calling or taking appointments), raiding houses for dinner. I even remember getting up one Sun morning and going to Dami's place for morning tea and coming back in the eve at 4 pm to get ready - all the while lying on his huge sofa watching TV (I didn't have cable connection). We were actually one big family with the best set up - we had our lives and privacy but we had eachother too.
Now all of us have moved away - people in Seattle have either bought or will buy big houses in other suburbs - some of us have moved out. i wonder if anyone of us still stays on that street.

What remains for me on that 148th street is the ghost - ghost of our 3 years! And I miss it. Miss it badly.
Posted by arati kadav at 9:32 AM