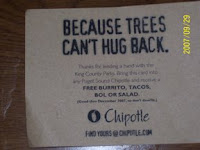 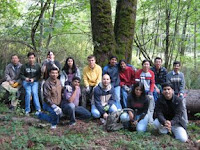 Donate one day to your community - work on something that is not related to your work. King county is the county to which we belong.
Well so that was the day of giving. The concept was great - enticing of sorts - except when the day of giving actually arrived. When I woke up I felt that the day was colder than usual and the work was going to be outdoors. On top of that we had to collect and car pool from office at 8:30 am - what!
Well I managed to reach office by 8:30 only to find the co-ordinater missing. Hmm - well I was angry and as usual not too keen and doing my - I dont wanna go -stuff.
Well we did go though. Seems like it was seattle weather's day fo giving too as later the sun rose and was shining brightly. All the while I thought it would just be like some timepass stuff - until I got there. Seems like there was indeed some serious worked plan and we had to take tool and be responsible for well-defined tasks ..aah. The thing that we had volunteered for was laying down a trail for trekking purpose. So we had 3 tasks -
1) Decommisooning a road - when suggested for the first time -we thought it was useless- all we had to do that cover existng trails with logs and plant ferns at the entrance so that no one walks over it. We felt a "Do Not Enter" sign should suffice but seems like that was out of question so we rejected this task untill our guide who lead us far-far away to a trail and asked to do exactly that. And oh yeah we did and lo and behold -utkash uprooted a dead tree to cover the trail.
2) The second task after a chocolate cup cake break (and a walk back to the trial head) was cleaning the trail by cutting down plants and trees that were growing in the path of the trail. The concept was that stretch both of your hands and if a plant hits your hand then it is on the way. Hmm - I started doing it and suddenly the concept of cutting plants hit me. Why cut plants - if you cut a animal it is savage - cutting plant not . So I was careful to not uproot healthy trees but just trim them - not less savage but well good enough to provide me a reason to cover my guilt.
Then there was lunch break with Alex getting some meticulosly packed tea (incidentally russians also cal ltea as chai (and they mean from china by that), potato edd salad and ham sandwiches. All desi married men coming with there 3 floor dubbas storing 3 course meals. We ate haertily - little did we know that the next task would consume all the energy we gained.
3) The next task was filling cart with heavy stones and taking it where the trail was laid. And this was by far the toughest. I and Alex carried the cart - mid-way I gave up holding it as it just flipped me -while coming back though I carried it. Ofcourse Alex had his part of sense of humour - how to donkeys yell in India. I said - ee aah ee aah. He said do they carry carts too and I sad - yes - some of them do. And then he started laughing. Hmm - it took me a while to understand that practical joke.
I ended with a gift card from King County. "It wrote - Trees can't hug back to say thanks". Well - only if they knew what was our task 2.
Posted by arati kadav at 12:41 AM

Hmmn, so you still upset about cutting trees :) ..